Russian Dwarf Hamsters are social creatures and can thrive as a pair or a group as well as living as solitary animals like the Syrian hamsters. Generally if you want a pair of Dwarf Hamsters you’re best of buying littermates. Introducing two strangers to each other and them leading a happy life together is very possible if you are careful and patient introducing them to each other.

Introducing two Russian Dwarf Hamsters to each other can be difficult or easy. It depending on a few factors.

Age of Hamsters – This factor is very important. The younger the hamsters the better. Once they reach full sexual maturity, their scent glands kick in 100% and their territorial instincts are a huge part of their personality. If there is an age gap between the hamsters, the older and bigger one will generally take the role as the alpha male, but there may be exceptions to that rule.

Sex – Generally males get along better than females.

Length of time living alone – If  Dwarf Hamster has been living alone for a long time it can make introduction them to a cage mate more difficult.

Personalities – Sometimes a Dwarf Hamster just wants to live alone and no amount of training or careful introductions will change this.

Living Conditions – Very important! Happy hamsters in a good environment are less likely to be stressed and want to fight. Large cages are best to facilitate good relations as well as plenty of toys and other distractions. 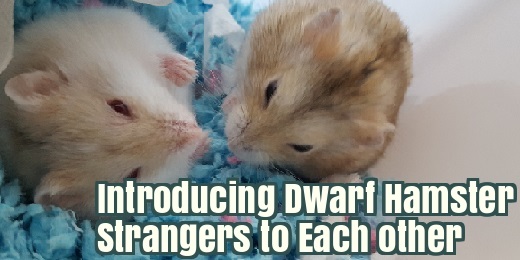 Your two Dwarf Hamsters should first meet in neutral territory free from any scent, with a barrier that allows them to see and smell each other but prevents them from attacking each other. A plastic bin makes an ideal location and a piece of chicken wire or mesh provides an ideal barrier. When they first meet each other through the bars there will most likely be a lot of teeth chattering, squeaks and attempts to attack each other. This is good. It allows them to vent their natural first meeting aggression safely and without harming each other. Leave them in the bin for an hour or so with some food and water and let them acclimatize to each other. I generally do this twice a day for a few days before removing the barrier and seeing what happens.

There is no exact science on when to remove the barrier and see what happens, older hamsters generally need introducing over a period of days before they stop trying viciously attacking each other. I have known (young) hamsters to ‘get on’ and start grooming each other within an hour of first meeting! A good place to start is when they stop chattering at each other and trying to attack.

When you are ready to remove the barrier, use your hand to ‘referee’ the encounter and try to stop any serious aggression. There will be some standing on their back legs trying to look as big as possible, some boxing and squeaking. This is a normal part of establishing the ‘hamster hierarchy’. Don’t panic and separate them, this is normal behavior Eventually you will notice one will submit and start lying on its back with its mouth open in order to let the other know who is the boss.

You can help ‘normalize’ being in each others company by distracting them with toys and treats! Sunflower seeds always go down well with Hamsters.

When you feel it is time for them to live together it is important use a pet safe disinfectant to thoroughly clean the cage, accessories, food bowl and toys. The idea is to remove any trace of hamster scent and help prevent territorial behavior. Be sure to change the old food and sand as well. Observe them closely for the first few days and bear in mind that some play fighting is normal. Play/Dominance fighting is different to serious fighting.

I have read online that using Vanilla extract drops to rub over both hamsters bodies making them smell the same can alleviate fighting and help them to get along. I have never tried it personally. 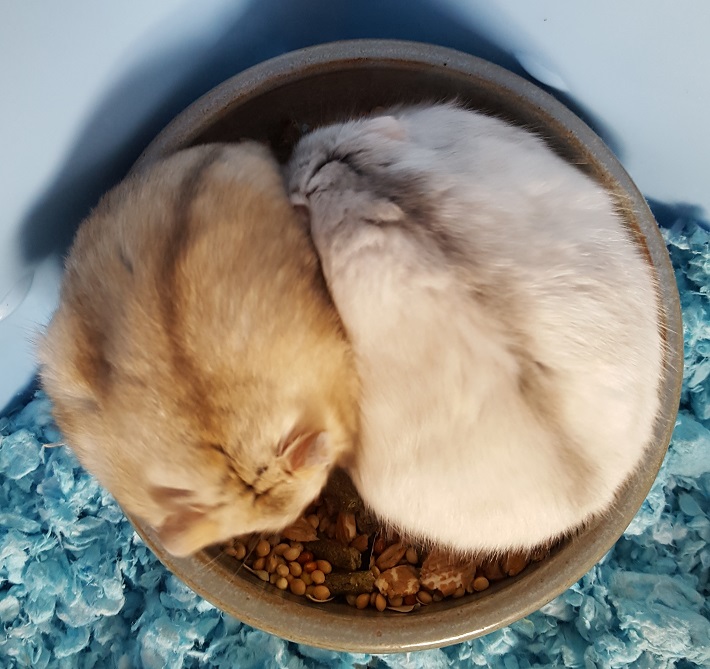 Once introduced and living together, you can foster good relations by ensuring the hamsters have: 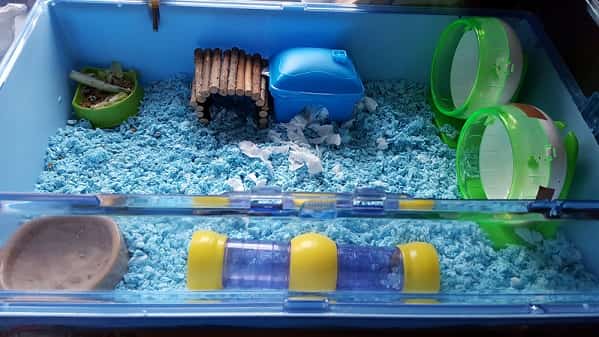